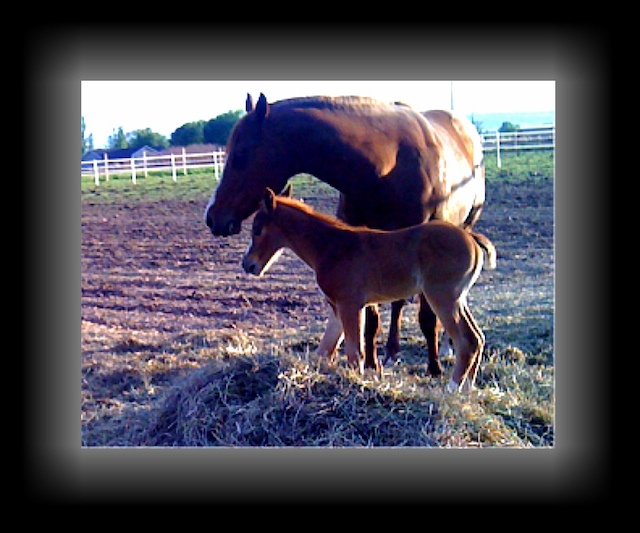 I just realized that I didn’t post a pic of the new colt born Sunday May 3. The photo below was taken when he was 7 days old.  His momma was a maiden mare and both baby and momma were challenged by the whole nursing thing.  Baby didn’t know where the teat was or what to do with it, and momma didn’t know how to try and encourage him to find it and use it. Momma was leaking milk but it didn’t help him learn what to do.

When he still hadn’t nursed after 5 hours we had to give him some bottle milk that we had purchased earlier just in case this type of situation developed. Foals need to nurse right away because the first few hours of milk production contain colostrum; all the antibodies to start the foal’s immune system. Without colostrum a foal will usually contract something in the first few days and not be able to fight off the illness.
We were able to get him to bottle feed enough colostrum-rich milk to get him through the night and by morning he had perfected the action that most of us males have been doing at every opportunity since puberty.  Testing showed that even with our bottle-fed colostrum his antibody levels were still slightly below the low end of the desired range.  After consulting with the vet we decided not to take the additional step of a blood transfusion because there was only a small chance of him being exposed to and contracting anything given that we don’t board other horses and we maintain a very clean environment.  I’m happy to say that after two weeks now, the little colt and momma are both doing very well.